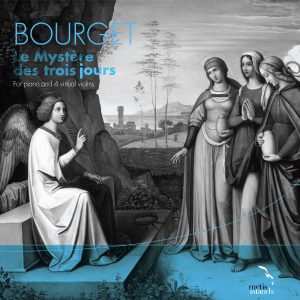 Le Mystère des Trois Jours (The Mystery of the Three Days) from Claude Marc Bourget is a 3-track CD that showcases Bourget’s prowess as a masterful pianist and programmer of virtual violins in addition to being an effective narrator. His compositions have an ambient coloring with choral-tinged passages that pervade a Gothic tint. Each composition represents a specific movement, telling the story of Christ’s resurrection through music. « Premier Jour » (First Day) symbolizes Christ’s death. « Deuxième Jour » (Second Day) reflects the transformation process. The last track « Troisième Jour » (Third Day) characterizes Christ’s resurrection. Inspired by the Biblical story, the music shows reverence for the miracle and provides sonic vignettes depicting the three stages of the evolution.

The compositions have a meditative-slant bringing together the orchestral tones of the violins and the chamber music-imbued resonance of the piano. Combined, the strings and keys culminate into a gospel hue reminiscent of Gregorian Chants, music which echoed from outside the walls of Gothic churches during the height of the Middle Ages. Bourget’s offering epitomizes the music of the Medieval Era implementing modern instruments and a contemporary view of the Biblical tale.

Notes move slow and subtly along « Premier Jour » reflecting the mournful mood over Christ’s death. The chord arrangements for the strings are dabbed gently at first then grow more intense and bold as the track progresses producing fluttering ringlets that float with angelic charisma. The composition describes the story of Christ’s death with thoughtful detailing and a consciousness of the grief-stricken scene. The second stage of the miracle « Deuxième Jour » resonates with choral tones scrolling a requiem of narrative strings that relate the part of the tale when Christ’s body transcends from the grave and rises up to heaven. The striking swells made by the strings evoke emotion in the listener as the graceful movements caress the ears. The natural and spontaneous flux of the strings expresses respect for the event. The final track « Troisième Jour » erupts with bright and elegant tones as the notes prance freely producing ambient soundscapes and choir-like atmospherics. The intensity in the sonic ruminations is moving and awakens sensations in the listener.

A profound storyteller, Claude Marc Bourget shows that his sonic vignettes can move audiences. The melodic descriptions shown on Le Mystère des Trois Jours join the keys and strings resounding traditional Gregorian-textured Chants with modern ambient tints and orchestra-tinged soundscapes. Produced by Metis Islands Music, Bourget’s offering demonstrates sensitivity and a reverence for the Biblical tale. Implementing the principles of artistic freedom, Bourget shows that he can craft moving stories through music and evoke emotion in the listener.